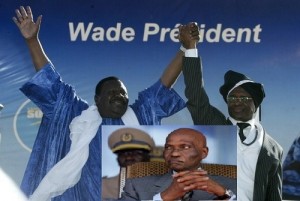 Marabouts Serigne Bethio Thioune (L) et Serigne Modou Kara raise their arms in support of outgoing president Abdoulaye Wade 23 February 2007 in Dakar at a final rally. Campaigning for the 25 February presidential election in Senegal has begun to close with tension raised by clashes between supporters of incumbent leader Abdoulaye Wade and those of one of his main challengers. The wooing of voters officially ends at midnight 23 February, sealing three weeks of a generally peaceful campaign marred by the violence on Wednesday night that left about 10 people hurt in a nation presented as a model of democracy in Africa. AFP PHOTO SEYLLOU (Photo credit should read SEYLLOU/AFP/Getty Images)